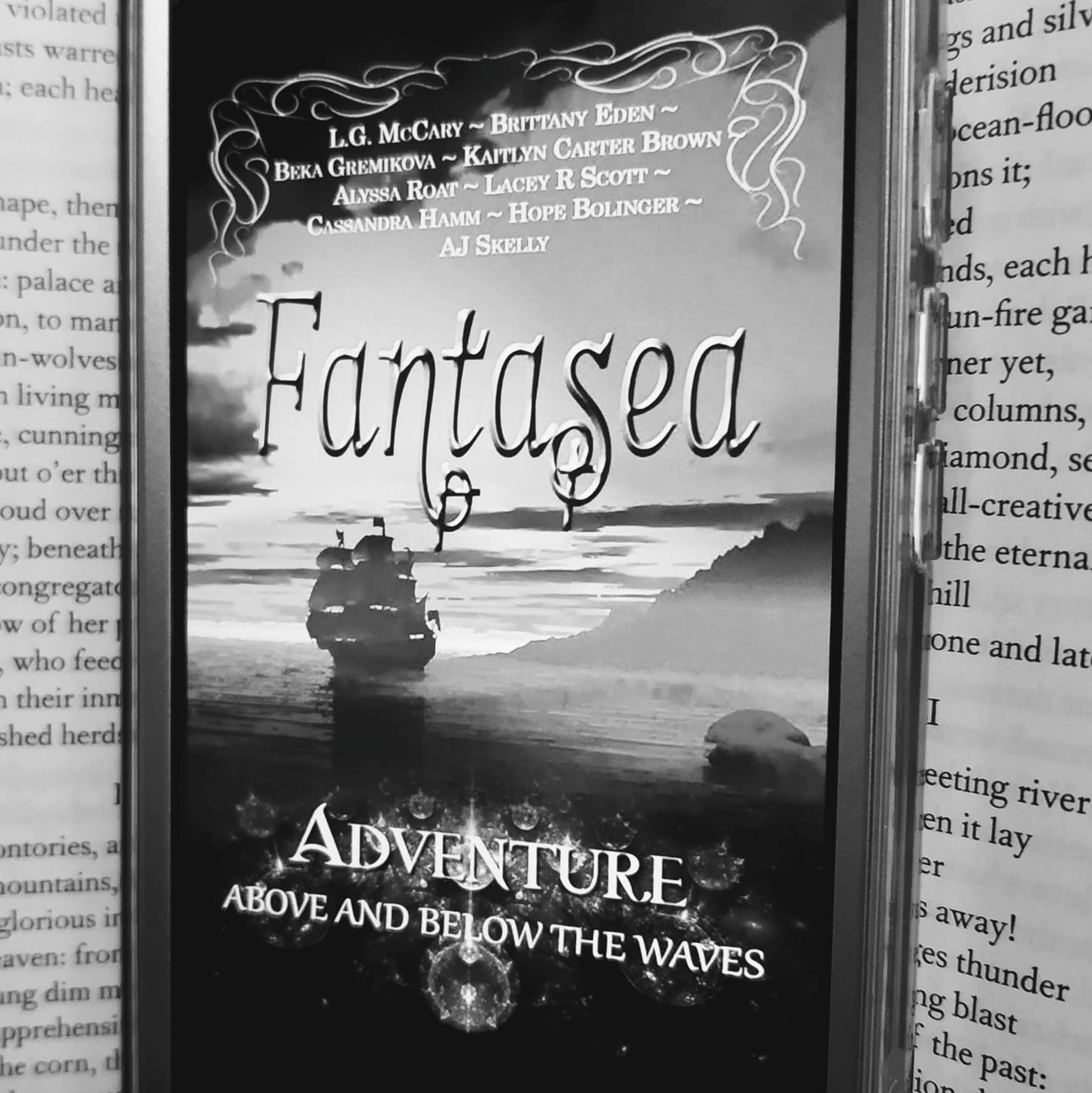 My short story, Candles in the Dark, features smugglers and forbidden love, tea and a lighthouse. Pinterest and playlist here!

The anthology releases August 8, 2022, and you can preorder the kindle edition here or paperback here!

Adventure above and below the waves

Join this collection of bestselling, award-winning authors as they dive into the waters of adventure, science fiction, fantasy, and romance.

Brittany Eden | Candles in the Dark

Basy survives the blackmail trapping her and her ailing great-grandmother in the lighthouse by funnelling trinkets to traders in the nearby port. But one night she rescues the son of the smugglers when his attempt to leave the family business by faking his own death fails, and she must decide if she wants to join his escape and find freedom.

Marin has struggled to breathe from her earliest memories, and her father is determined to save her life, even seeking out dangerous, illegal treatments. But is living a few extra moments worth the price?

Sam makes his living as a simple pianist in the city of Paolaos, performing in a piano bar for the night crowd and staying invisible. But one night, two strangers turn his world upside down. He realizes he’s not as invisible as he thinks, and that no one—not even the magically gifted—can escape the civil war tearing the ocean apart.

Desmond Pike would like nothing more than to escape the thumb of a ruthless captain and take his sister away from these waters. Risking everything on an uneasy alliance, Desmond charts a voyage that might save his skin, however, it’s his secrets— and the songs that the sea serpent sing in his head— that truly charts their destinies.

Alyssa Roat | Shepherd of the Llams

Ceri the morgen loves her beautiful Llamhigyn Y Dwr more than life itself, and she will do anything to protect the habitat of the mythological frog/bat creatures—including drown the men who keep intruding upon their home. Human Bran’s home suffers from drought, but when they try to create an irrigation canal running from a secluded lake, men mysteriously go missing. Bran sets out to slay the water monster, but when he discovers the true identity of the creature, worlds collide.

Being a broke insomniac graduate student is no joke. Being able to see ghosts isn’t either. But when a yokai water spirit finds its way into Amber’s apartment and explains that he’s been sent to curse her with nightmares, she can’t contain her laughter. She hasn’t had a decent night’s sleep in ages. Striking an unlikely friendship with the Curse, Amber continues her studies. When it comes time for the Curse to fulfill his contract, what will become of Amber?

Cassandra Hamm | The Song and the Sea

When Reed’s wife, Dayna, was kidnapped by pirates, he left everything to sail the sea and find her. But he is too late. Dayna is no longer the woman he lost; she has become a deadly siren who punishes human men for their crimes—and she is convinced that Reed is the one who did this to her.

In the twenty-first century, it’s so hard to hide from the public eye and swallow yachts for her nine to five. Her sea monster friend Scylla convinces her to take on human form and visit the mortal land for a day. But she may get herself into way more than a sixteen-scoop ice cream eating contest.

AJ Skelly | Trouble in the Deep

When faced with losing his captive love, merman Oceanus has no choice but to venture into the depths to retrieve the one thing that can save her. But danger lurks there, threatening more than the treasure he seeks.

AJ Skelly | The Kelpie and the Curse

Cursed by a vengeful wizard to scrape poop from the Kelpie pens until she finds her true love or time runs out, Princess Rhiann despairs. With time racing against her and no hope of braking her curse, she unexpectedly befriends one of the loathsome Kelpies. But when a handsome prince returns to the kingdom, will Rhiann trust the warning of a treacherous Kelpie or find the will to break the curse herself?